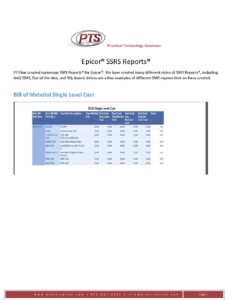 “On a cold winter Wednesday, I joined a metal fabrication conference in the Cleveland area.  We were led to a room covered in brown; the far wall lit up by a projector.  As I unpacked my laptop, trusty notepad and pen, I was approached by a man with a jovial smile.  The feeling that I should know him welled up inside me.  After taking a second glance at my nametag, he said, “we’ve worked together, but we’ve never met face-to-face.”  He went on to tell me how years prior we collaborated on a BPM that defaulted the correct shipping address for purchase orders according to the User-ID on the PO.  “Before you built that, about once a month, these huge semi-loads would arrive at our office building, over 400 miles away from the factory.  It was extremely frustrating, but now we can laugh about it because your BPM has saved us 10’s of thousands of dollars.  It hasn’t happened since.”  He shook my hand and thanked me, as we remembered working together.  Hearing this story made me proud of what I do and where I work.”

“I found PracticalTek with a Google search.  I spoke and met with Jim Chance and had a lengthy discussion about his company’s capabilities.  Everything sounded well as they possessed the capabilities we wanted, the reasonable rate and low risk.  That is, if this did not work out, I could sever the relationship quickly and move on. We have provided PTS with detailed specs often with screen-shots.  Our initial specs were for relatively simple customization’s.  We found that PTS worked very efficiently and coordinated very well with the project team. Today the staff of PTS is tackling our most complex customization and is working with us on other Epicor® implementation issues.  We also will utilize their report-writing capabilities shortly.  Because of this positive relationship, I highly recommend PTS for their efficiency, knowledge, communications and professionalism. “

“The other service we used from PTS was a training session that lasted a few days on site. We used one of their trainers, Jeremy, who was very talented in Epicor® but also had a naturally good communication style about him. He taught a few of our people the basics of writing Crystal Reports out of Epicor®. We plan on using PTS as a resource in Epicor® as we move forward.”

This website link is provided by PracticalTek, LLC to its prospective customers and clients conditioned on your acceptance of the terms and conditions of use as set forth herein. By browsing, accessing, using and/or downloading information from this site, you agree that PracticalTek, LLC is providing and you are using the information provided for educational or training purposes and that PracticalTek, LLC is not receiving remuneration for providing this information. Furthermore, you agree not to sell, reproduce, modify or attempt to modify the information provided nor reproduce, publish or distribute the materials. Unless otherwise noted, all materials are subject to intellectual property rights including copyrights and trademarks held by or licensed to others. In no event shall PracticalTek, LLC be liable to you for accessing this website.